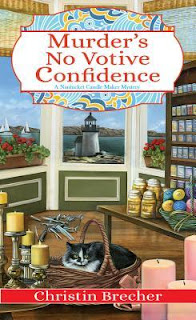 Nantucket candle store owner Stella Wright specializes in creating unique candles for every occasion. But someone sets the stage for murder when a Memorial Day celebration becomes a wedding to die for . . .

Jessica Sterling’s candlelight-themed nuptials promises to be the perfect kick-off to the summer’s first official holiday weekend. Stella’s thrilled to have been chosen to provide the decorative centerpiece for the wedding ceremony: a two-foot-tall scented unity candle—a symbol of the happy couple’s love. But it looks like the bride-to-be’s uncle won’t be walking his niece down the aisle after he’s found dead. The murder weapon is Stella’s seemingly indestructible candle, now split in two.

When a beloved local bartender is arrested, Stella’s sure a visiting police captain running the case made a rush to justice. With superstitious brides-to-be canceling orders and sales waxing and waning at her store, the Wick & Flame owner decides to do some sleuthing of her own. Abetted by a charming reporter and challenged by the town’s sexiest cop, Stella’s determined to shine a light on the truth and uncover a killer who’s snuffing out her own flame.

Murder’s No Votive Confidence has a lot going for it up front because it incorporates two of my very favorite things – Nantucket and candles. On top of that, Christin Brecher has created an entertaining and clean cozy mystery, steeped in small-island atmosphere. This is a fun traditional cozy read, a story that I can easily recommend.

With its cobblestone streets, quaint shops, whaling history, and beauty, the island of Nantucket is the perfect setting, as there’s just something magical about it for this reader. I’ve been blessed to visit Nantucket twice and can say that the author vividly captures its villages and events, which are creatively woven throughout the story.

Stella, owner of the Wick & Flame, is an appealing leading lady. The idea of crafting a unity candle for an island wedding is a creative touch, until that candle becomes the murder weapon. I could understand Stella’s desire to help solve the crime when a friend of her family is quickly arrested. And the making of candles is a great theme for a cozy mystery series. I love this quote from Stella’s “Candles 101” workshop notes at the end, where Brecher writes … “Candles are a source of light, a symbol at celebrations, the start of a romantic night, a balm for the senses, the heart of ceremonies, and a wonderful way to make a house into a home.” I can relate to those words because I almost always have a candle burning the year round. I hope there will be even more emphasis on candle making in future novels.

The mystery itself was well crafted and I enjoyed trying to figure things out along with Stella. There’s a delightful scene close to the end that had me cracking up. All I’ll say is that it involves a chase to beat all chases on the water, the craziest cat ever, and Stella’s friend going into labor.

There’s a lot of potential for this series, including deeper character development from Stella’s interesting family members. I hope the language stays clean and I’d like for the writing to be tighter at times, with less clothing descriptions, etc., that I tend to skim over. Also, I really hate love triangles and hope the potential one that seems to be building will quickly disappear. Don’t want to choose sides this early in the game, but I do like the police officer/childhood friend, Andy.

Murder’s No Votive Confidence is a fun read overall and I look forward to future visits to Nantucket.

Christin Brecher was born and raised in NYC, where her family and many childhood friends still reside. As such, she feels she is as much of a small-town girl as any.
The idea to write the Nantucket Candle Maker series sprang from her life-long connection to the small island off the coast of Massachusetts. Spending summers there as a child, Christin read from her family’s library of mystery novels, after which she began to imagine stories inspired by the island’s whaling heyday, its notoriously foggy nights, and during long bike rides to the beach.
After many years in marketing for the publishing industry, followed by years raising her children, Murder’s No Votive Confidence is Christin’s debut novel. Visit her at www.christinbrecher.com.