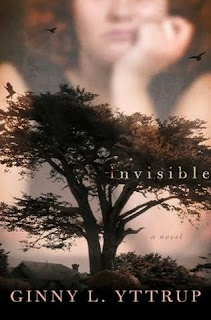 With her third novel, Ginny Yttrup has again written a rich, character-driven story that entertains, inspires, and draws the occasional smile or tear.  The struggles of three women who, on the surface, seem to have nothing in common and would therefore be unlikely candidates for close friendship, are successfully woven throughout this narrative set in the beautiful coastal area of Mendocino, California.  The title gives voice to the desire each woman has for invisibility, which can be traced back to some form of emotional trauma in her background.

Ellyn DeMoss -- chef, café owner, and lover of butter -- is hiding behind a layer of fat. But what is she hiding? While Ellyn sees the good in others, she has only condemnation for herself. So when a handsome widower claims he’s attracted to Ellyn, she’s certain there’s something wrong with him.

Sabina Jackson -- tall, slender, and exotic -- left her husband, young adult daughters, and a thriving counseling practice to spend a year in Northern California where she says she’s come to heal. But it seems to Ellyn that Sabina’s doing more hiding than healing. What’s she hiding from? Is it God?

Twila Boaz has come out of hiding and is working to gain back the pounds she lost when her only goal was to disappear. When her eating disorder is triggered again, though she longs to hide, she instead follows God and fights for her own survival. But will she succeed?

As these women’s lives intertwine, their eyes open to the glory within each of them as they begin to recognize themselves as being created in God’s image.

Let me begin by saying that Ginny Yttrup ranks among my favorites when it comes to the ability to write rich, multi-layered, character-driven novels with an emotional impact.  As I began reading Invisible, I thought that yes, it was very good, but not quite up to the standard of her previous novel, Lost and Found, which wowed me.  That initial impression has completely changed, however.  These two novels are different in their approach to the various life issues they deal with, but each is equally memorable in its own way and will stay with me for a long time.  Ginny's novels are also of "read again" quality for me.


"So God created mankind in his own image, in the image of God he created them; male and female he created them" (Genesis 1:27).  "Imago Dei" is the overarching theme that runs throughout Invisible.  What does it truly mean to be created in the image of God?  Do we see ourselves through God's eyes, or do we have a distorted picture of ourselves, colored by events of the past or what we think others see?

Twila is a woman of deep faith, and believes that God has given her the heart, as well as the experience, to help people in pain.  She has "Imago Dei" tattooed on her wrist as an ever-present reminder, and at one point shares a Saint Augustine quote with Ellyn:  "Men go abroad to wonder at the heights of mountains, at the huge waves of the sea, at the long courses of the rivers, at the vast compass of the ocean, at the circular motions of the stars, and they pass by themselves without wondering."  She goes on to explain, "We sometimes miss seeing Him in the most important thing He created. Us. God sees our inner beauty - the condition of our hearts."

Ellyn is a truly engaging character with a great sense of humor, yet she allows her weight to convince her that she is unworthy of love.  "With the last bite of the last croissant in the bag, a small voice whispers in my mind. Or maybe in my heart. You don't love food more than you love Me, Ellyn. You trust food more than you trust Me."

And then there's Sabina, trying to hide from guilt over the death of a counseling patient, and an even more consuming guilt that goes back to her childhood.  Ginny brings a love for classical music into Sabina's character, which I can relate to as a musician myself.  Referring to the San Francisco Symphony's Classical Series, Sabina reflects, "I am like the harsh dissonance - lacking harmony with myself. I am the incomplete chord unwilling to resolve itself."


Ginny has set Invisible in the beautiful Pacific coastal area of Mendocino, and made it an integral part of the story - for how can one see the majesty of God's creation without seeing Him?  One of my favorite scenes, actually reminiscent of the Napa Valley communion scene in Lost and Found, is when Sabina returns to a woodland cathedral close to the bluffs that Ellyn had previously shown her.  Here Sabina finally surrenders her guilt to God, acknowledging her "arrogance in blaming myself for something only God has the power to control."  This is a long, but beautiful quote from that experience:

"God, the creator of the universe, of the magnificence surrounding me, has called me to Himself.  I was, I am, without excuse. I will resist no longer. He invades my opening soul. . . . Shame is no more. Guilt is replaced by grace. . . . And then I hear my mama's sweet soprano in my mind, singing the words of her favorite hymn:

Come home, come home,
Ye who are weary, come home;
Earnestly, tenderly, Jesus is calling,
Calling, O sinner, come home!
Today, God has called me home. Not to eternity - not yet - but home to His lap, where my mother prayed I'd stay for all my years." 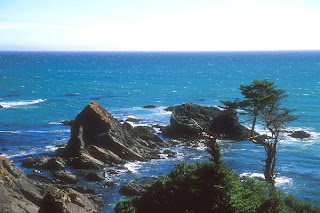 Do I recommend Invisible?  Highly.  Those who struggle or have struggled in the past with life issues will be encouraged by this book.  But this book really speaks to every reader.  Invisible is not about weight issues or health issues—it’s about freedom.

Learn more about Ginny and her books at ginnyyttrup.com

This book was provided by B&H Publishing Group through the author and NetGalley in exchange for my honest review.
Posted by Carole at 6:25:00 PM