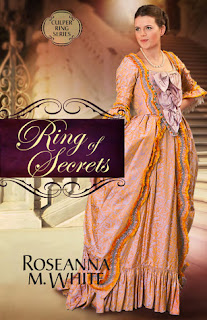 Ring of Secrets, first book in the Culper Ring series, is a well-written novel that blends fictional characters with real events and real people - such as Benedict Arnold, John Andre, and members of the Culper Ring. Loyalties are divided within families, friends, and neighbors - and the Quaker and Puritan influence is felt, especially through prayers inspired by the devotional book, The Valley of Vision.


Roseanna was gracious in taking the time to answer my questions and I enjoyed visiting with her . . .

Q:  What other books have you published prior to Ring of Secrets?


I have three other books out right now. Two biblical-era love stories, A Stray Drop of Blood and Jewel of Persia, and another early American romance, Love Finds You in Annapolis, Maryland.

Q:  I'm always looking for Christian fiction set during the American Revolution time period. Do you plan to write more novels set during this era?

I actually started researching this era solely because I wanted to set a book in historic Annapolis. In researching Annapolis history, I decided it was most interesting during the six months when it was the nation’s capital, in 1783-84. But as I delved more into the era, I was hooked! After finishing LFY Annapolis I started casting around my brain for another book with a similar time setting, and I hit on the idea for Ring of Secrets. Part of me is sorry my idea for the whole series didn’t stay in the Revolutionary period, but the idea for it turned into a generational tale, so alas.


I’d love to write another Colonial soon though, and have one plotted and ready to pitch to my publisher when my current contracts are getting closer to finished. 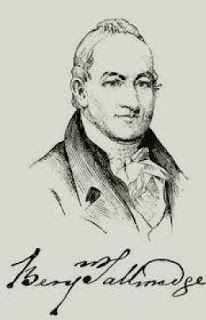 Q:  When it comes to the Culper Ring and the major players in Ring of Secrets, where does fact end and fiction begin?


This is one of my favorite parts of writing historicals! Nothing more fun than exploring the unknown in history through my fictional characters. In Ring of Secrets, Winter, Ben, Fairchild, and their families are completely made up, but most of the other characters are real historical figures—Robert Townsend, Austin Roe, Benjamin Tallmadge, Hercules Mulligan, Caleb Brewster, and Abraham Woodhull were the real members of the Culper Ring.


Q:  At one point in the book, Winter asks Ben if he is a deist (and I loved his spiritual journey). Was this a common belief at that time?


It was—and Thomas Jefferson is the most famous example of it. Philosophy of the day had combined to create this idea that of course there was a creator God, but why would He bother with the small details of their lives? That was why He had created mankind with reason and logic, to solve problems for themselves. Most deists had a respect for God, but not a faith in Him.

Q:  What do you hope readers will take away from Ring of Secrets?


My deepest prayer is that it will make them stop and ask themselves how they can serve the Lord in whatever place He has put them. Whether they’re a sales clerk, a teacher, a truck driver, a stay-at-home-mom, a fashion model, or a soldier, He has a calling on their lives—and if they listen to His whispers, He can show them how to change their world from wherever they are.

Q:  What outstanding books, present day or classics, would you recommend because they inspired you?


Oh, this is always a tough one for me! I love Jane Austen, the Brontes, Shakespeare, all that classic literature. In terms of modern authors, Francine River shaped me immensely as a writer. Laura Frantz writes in this same era and is phenomenal. Stephanie Morrill is a YA author whose stories touch me deep in my heart. Um...goodness, I could on forever, LOL. So many fabulous writers out there!
To learn more, visit . . .
Roseanna's website at roseannawhite.com
Pinterest board for Ring of Secrets:  http://pinterest.com/roseannamwhite/ring-of-secrets
Roseanna's blog:  http://www.roseannamwhite.blogspot.com
The Valley of Vision, edited by Arthur Bennett:  http://amzn.to/YxOuJm

This book was provided by Harvest House through NetGalley in exchange for my honest review.
Posted by Carole at 3:15:00 PM