Review: So Shines the Night, Part 2

Tracy Higley, on location in Ephesus

Tracy was gracious to take the time to give more background into So Shines the Night and to answer some questions.  Enjoy what Tracy has to share with us . . .


Q:  What was one of your favorite things about visiting Ephesus?


A:  I think it was the sense of being somewhere “where Paul walked.” Sitting in the theater, looking down over the Harbor Street where he was likely kept prisoner at times, I had this amazing moment of “I can’t believe I’m here” – the kind of moment that gives you chills and makes you feel connected to something larger than yourself.

Q:  Please tell us about the type of books you write, Tracy.


A:  Most of my books are historical, and I have a particular love for the ancient past. Sometimes my characters rub shoulders with biblical personalities, and sometimes they don’t, depending on the time and setting of the book. I’ve written novels set in ancient Egypt, Greece, Rome, Italy, Persia and Arabia, and the dates range from 2500 BC all the way through to about 100 AD. 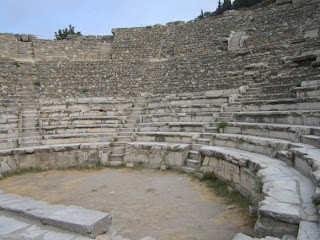 The official political meeting house of the city,
known as the Odeon. It would have had a roof in ancient times.
In So Shines the Night, this is the setting of the trial.
Q:  Does Daria get to meet Paul and interact with him in So Shines the Night, or does she view his ministry from afar?         A:  Oh, it was great fun getting Daria and Paul to meet. Challenging, too, since everyone has a fairly specific concept of Paul and the way that I write him might not exactly conform to others’ preconceptions. Daria also meets some other biblical characters from the book of Acts, and I tried to portray them each struggling and human in their own way, wrestling with what it meant to be this new kind of Jew, this person whose Messiah had come.
Q:  I was intrigued by the way the people and events of Acts 19 are woven throughout So Shines the Night. How strong a grip did idolatry and sorcery have on the people of Ephesus, and were many of them able to break free?
A:  We can see from both the book of Acts and the book of Ephesians that spiritual warfare was a significant activity in Ephesus. There is much mention of sorcerers, demonic activity, healings, and the battle with Satan specifically in Ephesus. I think it was partly due to the strong cult of Artemis that existed there. But Ephesus also became a very strong church, with Timothy eventually pastoring it, so I think we can see that God did some mighty work there as well. It was an interesting study, looking into the practices that may have been part of the worship at that time. Most people saw the gods as beneficent, and feared demons. The sorcerers were usually tied to the demonic, but people often sought them out for various reasons. 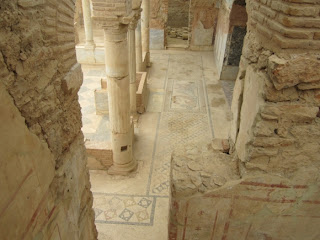 Can you picture Lucas's courtyard below?


Q:  Do you worry about the integrity of the story when you have to add so much to flesh it out from the actual biblical account?

A:  Yes. It’s a core value of mine that as I write fiction that brushes up against actual biblical events, that I not alter what we know of this history and people. I may not always get it right, and some may argue about their interpretation of what really happened versus mine, but I always strive to keep the integrity of the biblical account intact. There is plenty to “flesh out” around the reality, and I let myself get creative there, but not with what we truly know from Scripture.


Q:  What is something new you learned while doing research for So Shines the Night?

A:  That’s a tough one, because there were so many things! The whole city of Ephesus is such an interesting study. Because the river that fed into the harbor carried so much silt with it, the harbor eventually became too clogged for ships and the people basically abandoned the city. This rarely happens in the ancient world – most ancient cities, like Rome, are a mix of ancient, medieval and modern and you have to travel around to the pockets of ancient monuments that are left. In Ephesus, all you have is the ancient city, so it has this frozen-in-time feeling like Pompeii, which I loved. 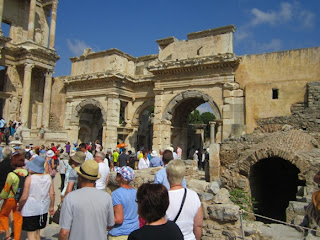 These are the gates outside the commercial (harbor) agora,
where Daria asks directions of the old men sitting there.
Q:  How has your writing, research, and travels affected  your spiritual life?
A:  All of it has definitely given me a larger sense of the world and what God is doing in it, both now and through the past. It’s made me realize, as I’ve studied God’s work in the nations throughout history, that He has always been calling all people to Himself, and that He still is. It’s also given me a desire to see the kind of Christianity that was born in the fires of Roman persecution become part of our experience now – a living, breathing faith that radically transforms our lives.
Q:  What do you hope people will take away from this story?
A:  There are a number of themes I explored here, so it will vary from person to person, depending on where they are on their journey. I hope people will get a sense of the reality of the first century church, of Paul as a man. I want people to see that the love God has for us makes us secure, and that from that foundation we can risk to love others. I want readers to long for a sense of community that is found in the church of Ephesus. 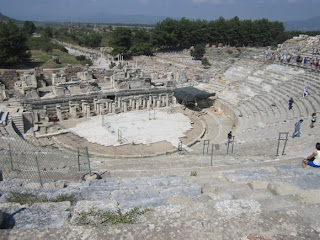 Here is where the townspeople nearly started a riot,
shouting "Great is Artemis of the Ephesians"
while Paul's friends kept him outside, fearing for his life.
Q:  What would you like to say that might encourage readers to pick up a copy of So Shines the Night?
A:  It’s my hope that readers will really feel the book of Acts come alive for them while reading this book. If you’ve ever wanted a first-hand glimpse of an ancient biblical city and the early church that lived and loved and battled there, I think you’ll enjoy So Shines the Night.
Visit Tracy's website at tracyhigley.com to learn a lot more about her books, research, and visits to biblical lands.
This book was provided by Thomas Nelson Publishers through the author and NetGalley in exchange for my honest review.