Review: So Shines the Night, Part 1 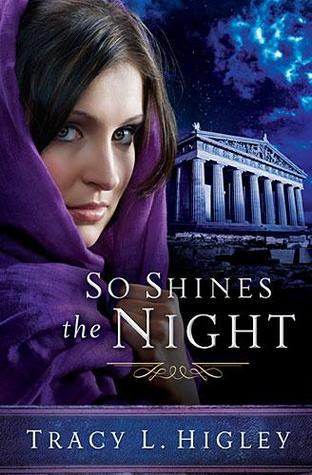 So Shines the Night is part of Tracy Higley's Seven Wonders of the Ancient World series.  It is refreshing to see the way characters and events of Acts 19 are woven throughout this novel, which also shows the conflict between the idolatry practiced at the Temple of Artemis in Ephesus with a growing sect of Christians following the Way.


Daria escaped a past of danger and now resides in beautiful Ephesus, a trading center on the Aegean coast. A gifted linguist, she serves as tutor to Lucas, the wealthy merchant who rescued her. But the darkness she fled has caught up with her in Ephesus. Although Daria’s attraction to her employer is undeniable, the more she learns, the more she despairs. Caught up in an obsession to avenge his late wife’s murder, Lucas seems to slip closer each day to the darkness that consumed his wife.

The high priests of Artemis once controlled the city, but a group of sorcerers are gaining power. And a strange group who call themselves followers of The Way further threaten the equilibrium. As Daria investigates Lucas’s exploits in the darker side of the city, her life is endangered, and she takes refuge in the strange group of believers. She finds herself drawn to the outspoken and ever joyful Paul and his friends, even as she wrestles with their teachings.

When authorities imprison Lucas for a brutal crime, Daria wonders if even Paul’s God can save him. Then she uncovers a shocking secret that could change everything—Lucas’s fate, her position in his household, and the outcome of the tension between pagans and Christians.


Tracy does a very good job at writing historical fiction set during biblical times.  Her extensive research and travels to the site of Ephesus add much depth to the narrative, as well as allowing the reader to "see" the marketplace, theater, temple, harbor, etc.  The writing flowed at a steady pace, holding my attention throughout.


Tracy uses the characters and events of Acts 19 as a framework on which to weave the romance of Lucas and Daria, along with the idolatry and sorcery elements prominent in Ephesus:


"Paul entered the synagogue and spoke boldly there for three months, arguing persuasively about the kingdom of God. But some of them became obstinate; they refused to believe and publicly maligned the Way. So Paul left them. He took the disciples with him and had discussions daily in the lecture hall of Tyrannus. This went on for two years, so that all the Jews and Greeks who lived in the province of Asia heard the word of the Lord" (Acts 19:8-10 NIV).


The characters of Lucas and Darius are both complex and realistic, as they struggle against the presence of evil, both within and without. Daria is driven by guilt "to put things right when they were out of place, including people."  Feeling that Lucas does not show proper allegiance to the goddess Artemis, she warns him: "You should take more care yourself, my lord, about pleasing the gods.  Success in life requires their help.  And a failure to honor them will bring punishment."


There is a dark feel to this book, reflecting the power and influence of the sorcerers at the time. The description of Hektor's place gave me chills:  "The room full of sorcerers offered spiritual ecstasy for a price, spells to bring on love and destruction, health and disease, wealth and poverty.  Everyone wanted what they could give, and those who could pay found their way here.  Sometimes the cost was greater than they had meant to pay.  But still, they came."


I loved seeing familiar characters from the early church through Tracy's eyes - Paul, Timothy, Aquila and Priscilla, etc. - and they gave a warm feeling in contrast to the evil pictured above.  In the scene where books of sorcery were burned, Tracy writes this about Paul:  "His lips were moving, though she heard nothing.  Some kind of silent prayer of power, it created this channel of safety for them to come, to leave their past behind, burned and purged in the fire to be remembered no more.  He stood against the evil, and he was not destroyed."


So Shines the Night is a beautiful story of the contrast between good and evil, light and darkness, and the final triumph of that light through Jesus Christ our Lord.  In the final words of the narrator, John:  "The days remain dark yet, but we will overcome. By the blood of the Lamb. And by the word of our testimony. By the word of our story, yours and mine . . . So shines the night."


This is a well-written and researched novel that I can recommend to all readers of inspirational fiction, especially those who enjoy stories with biblical settings.


Visit Tracy's website at tracyhigley.com to learn a lot more about her books, research, and visits to biblical lands.

This book was provided by Thomas Nelson Publishers through the author and NetGalley in exchange for my honest review.
Posted by Carole at 1:08:00 PM