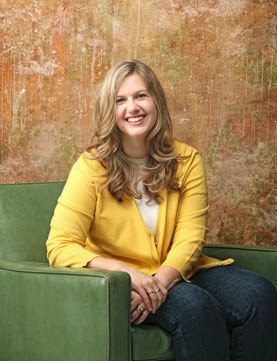 I've only recently discovered Amy Clipston's writing and she has quickly became a favorite of mine, both as a writer and as my sister in Christ. In comparison to similar books, A Mother's Secret dealt with some difficult social issues and made me pause for reflection, while entertaining and inspiring at the same time (see my review here). Quite an accomplishment, Miss Amy!

So it is with much delight that I welcome Amy Clipston to The Power of Words. Many of you are probably familiar with Amy's writing already, but maybe you will learn something new about her through this interview. And a special surprise is that Amy is giving away a copy not only of A Mother's Secret, but her new book, A Dream of Home as well! Entry details are at the end of this interview.

I live in North Carolina with my husband, Joe; two sons, Zac and Matt; mother, Lola; and four spoiled-rotten cats, Molly, Lily, Rico, and Jet. I work full-time for the City of Charlotte, and since I write four books per year, I also write full-time.  I work four 10-hour days for the City in order to have Fridays off for writing, running errands, and volunteering at my boys’ school. I’m also blessed to have my mother living with my family. She handles most of the housework, including food shopping, cleaning, and doing laundry. Thanks to her help, I’m able to spend any free time at home writing. My schedule is not ideal schedule, but I make it work. My family is very supportive and thankful for my book contracts.


Q:  I know that organ and blood donation is something you are passionate about, Amy. Please share a little about this.

Some readers may not know that my husband, Joe, has endured two kidney transplants. Joe received a kidney from his brother in 2004, and it only lasted four years.  In 2008, he went back on dialysis, and he was very ill. I was willing to donate to Joe, but I wasn’t a perfect match. Instead of donating a kidney to Joe, I found another way to help him.
I donated a kidney on June 14, 2011, at Johns Hopkins Hospital. Through my donation, my husband, Joe, received a second kidney transplant. My husband and I matched another couple and swapped kidneys with them. I donated a kidney to a woman, and in exchange, her husband gave a kidney to Joe. My memoir, A Gift of Love, details our journey with Joe’s kidney disease and his two kidney transplants.   You can find my memoir here.
Due to Joe’s kidney struggles, I’ve become an advocate for both organ and blood donation. I volunteer with the National Kidney Foundation, and I also run blood drives both at my work and at my church. If you are healthy and able, please give the gift of life and donate blood.


Q:  You've posted some delicious looking Amish recipes on your website. Do you incorporate these into your novels and do you have a favorite?

My first Amish series, the Kauffman Amish Bakery series, featured several recipes in each of the five books.  Crumbly Peach Pie was the favorite of Timothy Kauffman, who was featured in my book A Place of Peace. Timothy is one of my favorite characters, so I thought I’d include that recipe here:

Mix together the sugar, flour, cinnamon, and nutmeg, then mix in butter until crumbly. Sprinkle half of the mixture in the bottom of the pie shell. Arrange peach halves cut side down over crumbs.  Cover with remaining crumbs. Add the water after and bake for 10 minutes at 450 degrees, then for 30 minutes at 350 degrees. 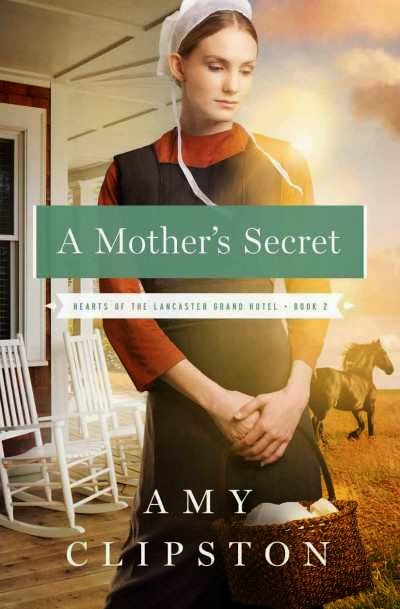 Q:  Tell us a little about the Hearts of the Lancaster Grand Hotel series and how the book we're featuring today, A Mother's Secret, fits in.

The Hearts of the Lancaster Grand Hotel series features women who work at the fictional Lancaster Grand Hotel.  The series was inspired by the Berlin Grand Hotel in Berlin, Ohio, which I visited in 2011 while I was on a book tour with two other Amish fiction authors, Shelley Shepard Gray and Vannetta Chapman.
A Mother's Secret is the second in my Hearts of the Lancaster Grand Hotel series. In this book, Carolyn Lapp dreams of marrying for love. But will the errors of her past destroy this dream forever?
Carolyn Lapp longs to have a traditional Amish family. But she lives on her brother's farm with her parents and her 15-year-old son, Benjamin. Carolyn has never revealed the identity of Benjamin's father and lives daily with the guilt and shame of her youthful indiscretion. Her brother simply will not forgive her. His answer is to arrange a practical marriage for Carolyn to Saul, a widower with a little girl. But Carolyn isn't convinced that Saul really loves her and believes he is simply looking for someone to help raise his daughter.
When Benjamin causes trouble at a local horse auction, horse breeder Joshua Glick decides that he must be taught a lesson. Carolyn and Joshua are unmistakably drawn to each other, but Joshua mistakenly assumes that Benjamin is Carolyn's nephew. Carolyn fears that if he discovers the truth, her past will destroy their budding romance. After years of shame and loneliness, Carolyn suddenly has two men vying for her attention. But which of them will give her the family - and the unconditional love - she's longed for?

I think readers will enjoy seeing Joshua Glick in this book since he was a minor character in book 1, A Hopeful Heart. Readers will also have the opportunity to find out what happened to Hannah, the main character in the first book.
Book #3, A Dream of Home, will release on November 4. In this book, readers see more of Saul Beiler and they will also get to know Madeleine, who served in the military before coming to Amish Country. Madeleine, like Carolyn, has an interesting past, and I think readers will enjoy her story.


Q:  Pretend I’m a customer browsing through the Amish section at a local bookstore. What would you say to convince me to select a book from this series?

I would tell you that the books in my Hearts of the Lancaster Grand Hotel series appeal to readers because they feature characters who are struggling with some of the same issues you and I are tackling. My books also touch on some deep issues, and the characters struggle with relatable problems.


Q:  Carolyn Lapp's story is a good reminder that the Amish deal with the same life struggles that we face. What will draw readers to Carolyn?

I think Carolyn appeals to readers because she’s not perfect. Carolyn has made mistakes in the past, but she strives to be a good mother to her son. We all have made mistakes, and we struggle with the consequences.


Q:  In comparison to some other Amish fiction that I've read, A Mother's Secret includes some weighty spiritual issues. Is there a theme that particularly speaks to you, Amy?

The theme that always speaks to me is forgiveness.  I believe we all struggle with both forgiving others and also forgiving ourselves.  Carolyn and Joshua encounter this issue throughout A Mother’s Secret, and I think readers will be able to relate to it as well.


Q:  What do you hope readers will take away from A Mother's Secret?

I readers will not only enjoy Carolyn’s story but also be touched by the themes of forgiveness and second chances. 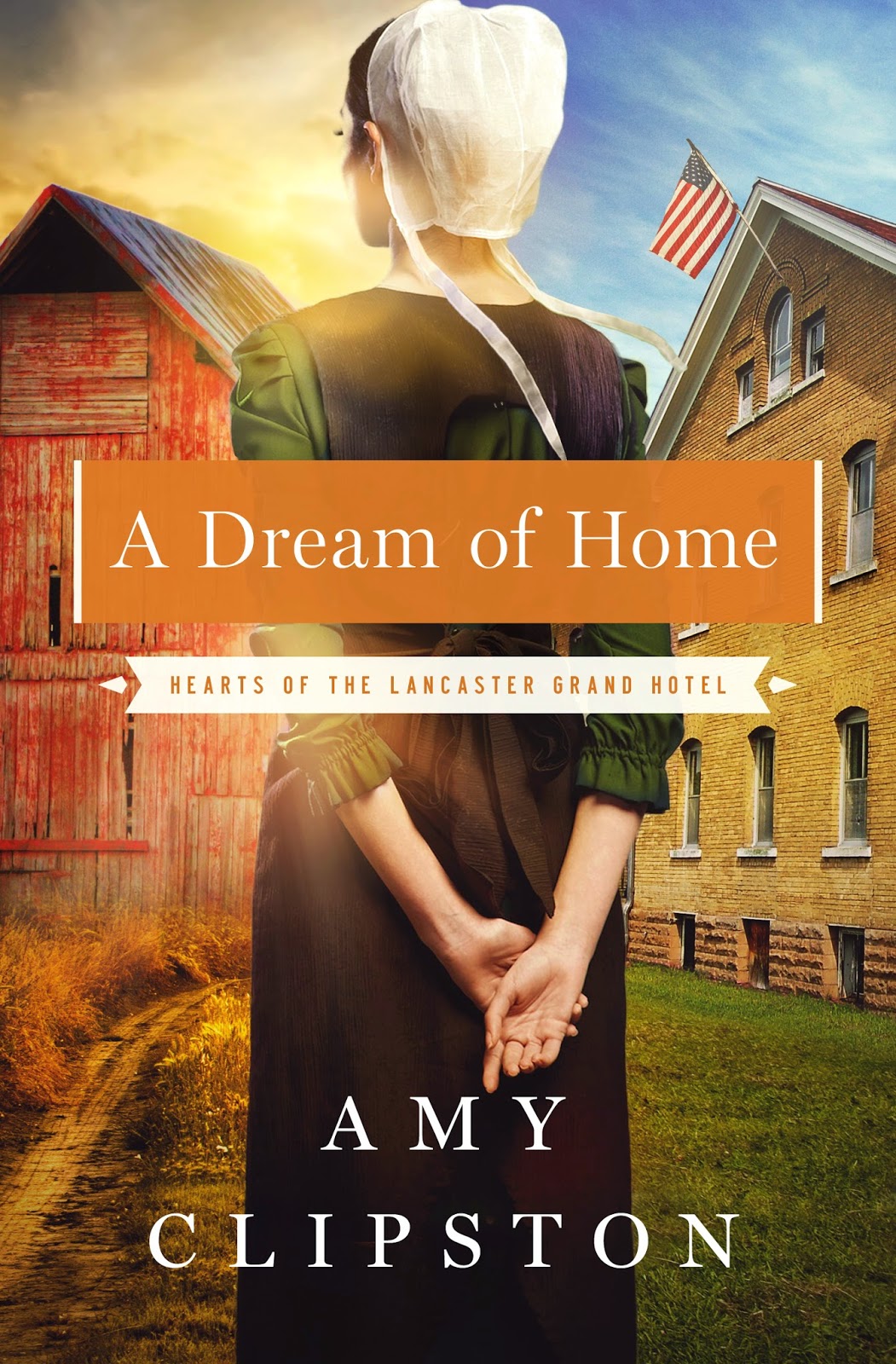 Q:  What stories can readers expect from you in the days ahead?

As I mentioned above, book #3 in the series, A Dream of Home, will release November 3. The book features Saul Beiler, who was a minor character in A Mother’s Secret, and readers will also find out more about Madeleine Miller, who works at the Lancaster Grand hotel with Carolyn, Ruth, and Linda. Here is the book’s blurb:

Moving to Pennsylvania wasn't in Madeleine's original plans. She should still be in California and should have married her pilot fiancé a year ago-but death has a way of changing everything. Now the former Air Force flight nurse is living alone in Paradise, Pennsylvania, and working as a maid at the Lancaster Grand Hotel. She isn't exactly a widow . . . but she sure feels like one.
Saul Beiler isn't exactly a widower . . . but his wife is long gone. His eleven-year-old daughter, Emma, doesn't know that her mother fled the Amish community-and married another man-but she does know that her dat is lonely, and that a pretty young maedel just moved in next door. Madeline's numb heart begins to thaw as she spends more time with the innocent and ever optimistic Emma. The stronger her friendship grows with the young girl, the more intrigued Madeline grows about the humble, strong, man raising her on his own.
But even as a strange attraction pulls Saul and Madeleine across a stark cultural divide, they-and everybody else-have to wonder: What could they possibly have in common besides heartache? Will love allow Madeleine to finally find the home she's been dreaming of all along?

The last book in my series, A Simple Prayer, will debut in June 2015.  I’m excited to announce that I’ve finished edits for that book, and I’m working on the first book in my next Amish series. I’m thankful that I’m able to create another series based in Pennsylvania and I hope to share more information soon.

Thank you for featuring me on your blog!
Blessings,
Amy

To enter the drawing for A Mother's Secret and A Dream of Home, simply answer the question below and also leave a comment for Amy if you'd like. PLEASE REMEMBER TO LEAVE YOUR E-MAIL ADDRESS in a safe format - [at] and [dot]. If you're willing, it's also helpful to share about this giveaway on Facebook and/or Twitter.

Question:
Do you like having recipes, such as the one Amy shared, included
in books? If so, have you ever tried any?