Review: Keepers of the Covenant 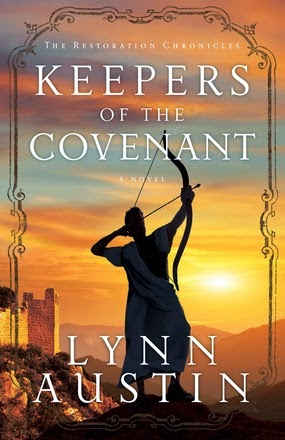 Keepers of the Covenant
By Lynn Austin
The Restoration Chronicles, #2
Bethany House, 2014

In one life-changing moment, the lives of the Jewish exiles in Babylon are thrown into confusion and despair when a decree arrives from the king's palace in Susa. It calls for the annihilation of every Jewish man, woman, and child throughout the empire on the thirteenth day of Adar, in less than one year.

Ezra, a quiet but brilliant Jewish scholar and teacher, is suddenly called upon to lead the community as they seek God for a reason for this catastrophe. When a second decree arrives, authorizing them to fight back, Ezra is thrust into the role of military leader as they defend themselves against their enemies.

When the battles come to an end, Ezra's brother Jude is dead and Ezra is required by the Law he so diligently studies to marry Jude's widow, Devorah, and provide an heir. Fatherhood changes Ezra, and he asks God to make a way for him and the other exiles to leave Babylon for good and return to Jerusalem. His prayers are answered and the exiles move to Judea to revitalize worship at the temple---but the fight to keep God's Law is never easy. As more and more of his community are tempted, a new battle emerges . . . this one for the survival of God's covenant and the souls of His chosen faithful.

No matter what genre, Lynn Austin is a masterful storyteller and exquisite writer. Her lyrical prose and characterization immediately capture my attention, her ability to paint word pictures literally puts me into the scene - and with The Restoration Chronicles series, Lynn makes an unfamiliar period of Israel's history shine with its compelling relevancy for today. The narrative closely adheres to Scripture and the addition of fictional characters only makes these events come alive. In Keepers of the Covenant, we see the Covenant God who balanced justice and mercy, law and grace. The best biblical fiction makes me eager to read the scriptural account, and that is exactly what happened here.

The first section of Keepers of the Covenant takes place in Babylon, opening with King Cyrus allowing Haman to issue a decree ordering that all Jews would be killed on the thirteenth day of the twelfth month, a decree that could not be rescinded (Esther 3:13). Although familiar with the biblical account, for the first time I wondered what it had been like to live each day in the knowledge that you would be killed in a few months. I could sense their fear and despair, questioning, trying to understand why God would allow this.

Ezra was no closer to discovering the mind of God or a way
to save his people. Instead, he'd discovered the vast difference
between talking about God all day and talking to Him; between
knowing about God and His laws, and knowing God.
____________________

I loved how Keepers of the Covenant focused on Ezra and really came to appreciate this wise spiritual leader. Upon hearing the phrase for such a time as this, we immediately think of Esther, but I believe the same can be said for Ezra. He was a quiet man who loved studying and teaching the Torah. But God had a plan for His remnant, and when the time was right, Ezra was in place to lead.

Secondary characters were fascinating . . . Devorah, who wanted marriage to be a partnership and went before the elders to battle for Ezra . . . Amina, the young Edomite girl who found unconditional love from a Jewish family . . . and Reuben, a Levite who ran far from God in anger, but eventually found redemption.

There was so much that spoke to me in this story, things that make it extremely relevant for us today. Spiritual Babylon's dangers of apathy, assimilation, and compromise are woven throughout, and could anything be more haunting than Ezra's words to Devorah:  "If we aren't careful, we'll wake up one morning and discover we aren't a separate people anymore."

This thought from Reuben's Abba expresses another theme, one that I will take away from this story:  "It's the highest form of praise to keep believing that God is good even when it doesn't seem that way."

Lynn Austin is a former teacher who now writes and speaks full time. Lynn was recently inducted into the Christy Award Hall for Fame for winning eight Christy Awards for her historical fiction. One of those novels, Hidden Places, has also been made into a Hallmark Channel movie. Lynn and her husband have raised three children and make their home near Chicago, Illinois.

Keepers of the Covenant can be purchased online at CBD, DeeperShopping, B&N, and Amazon.

Thank you to Litfuse Publicity for providing a copy of this book in exchange for my honest review.
Posted by Carole at 11:44:00 PM